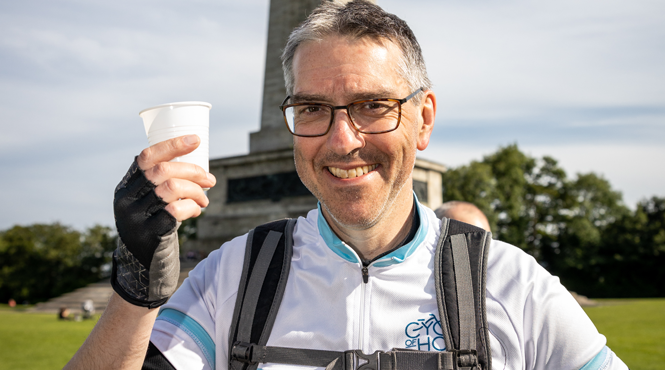 Q: How long have you been a scientist?

A: I was brought up on a council estate in North London and from an early age was determined to pursue a career which would interest and fulfil me. There were no doctors in my family but I was encouraged by teachers and ended up getting a place at Cambridge to do Medicine. After qualifying, I moved on to a junior doctor post in Nottingham where I decided to specialise in Haematology. I took up a Registrar post in Liverpool in 1992, completed my PhD and was appointed as a Senior Lecturer in 2000. I was made a Professor in 2006 and Head of the University Department of Cancer Medicine in 2011.

Q: What is your role?

A: I have a few roles at the moment. I treat patients with blood cancer – mainly lymphoma and chronic lymphocytic leukaemia (CLL) – but also have significant research and teaching commitments for the University in addition to being Head of Department. Other roles include Cancer Programme Director for Liverpool Health Partners and Chair of the National Cancer Research Institute Lymphoma Group.

Q: What are you currently working on?

A: I am leading several national clinical trials in lymphoma and CLL. The latest of these involves a disease called follicular lymphoma. It splits patients into good and poor prognosis groups using a cutting edge scan called PET-CT. It is looking to see if the outcome of the poor-risk group can be improved by giving more treatment and if side effects can be reduced in the good-risk group by giving less treatment. I am also leading several national sample collections which are being used by groups across the UK for cutting-edge research projects. One of these is being done in Liverpool and involves a technique called proteomics, which is a technique for analysing thousands of proteins simultaneously. The project aims to understand which proteins are involved in treatment resistance and develop new ways of predicting and overcoming it.

Q: What drives you in your job?

A: Just over two years ago I dropped dead with a cardiac arrest but was lucky enough to be brought back to life without any lasting damage. I was in my early 50s and fit and well with no indication of illness, so I have a good grasp of just how short life can be and how easily it can be extinguished. A large part of what drives me nowadays is being able to say that I did something meaningful with my life. Working at the sharp end, I’ve seen with my own eyes how much science and research can benefit real people - not just through the end result but also through taking part in research - and it is amazing to be part of this process. Another aspect of my work that I find hugely rewarding is team building. Teamwork is fundamental to modern science and research, and real magic can happen when experts from different fields come together with a common purpose.

Q: What do you do outside the lab?

A: I have a family with three boys. Two are at university and one has just finished his GCSEs so they keep me busy. I also like to keep fit. I cycle 10 miles to work and back every day, do a bit of mountain biking and have a skiing holiday every year.  I also took up running 4 or 5 years ago and have so far completed 29 marathons, although I’ve been out of action over the last year with a niggling injury. My biggest claim to fame - and a real boost to my confidence at the time - was doing the London marathon 3 months after my cardiac arrest. I’m also a bit of a train nerd and try to spend some quality time with my model railway several times a month.