A team of eight thrill-seekers have taken to the skies for an adrenaline-fueled charity challenge to raise funds for life-saving research with The Big Jump Skydive.

The daredevil participants travelled from all over the North West and North Wales to Cockerham, Lancashire to soar to the dizzying heights of 15,000ft before taking a leap of faith back down to earth.

Mike Whalen from Birkdale, Southport, originally decided to take on the challenge after his wife, Jeanette, celebrated five years of being given the all clear of breast cancer and their son, Dan, joined soon after for moral support.

Not content with their white-knuckle fundraising experience, Mike duo also organised a fundraising night at Southport Rugby Club (SRFC), where Dan is captain of the team. Treating the crowd to a night of music from his band, Dan also rallied his rugby teammates to dig deep into their pockets and increase his sponsorship before the big day.

Dan said of the skydive: “Best experience of my life! After always having a fear of heights I never thought I would do something like this. To do it in support of NWCR makes it completely worthwhile.

“To have the support of SRFC for both me and my dad has helped us raise a lot more than I ever envisioned. The support and awareness that SFRC continues to show for local charities, including NWCR, is very much appreciated.”

The sky truly is the limit for fundraising with the father and son duo as they’ve raised a staggering £3,465 – miles above their £800 combined target.

Travelling all the way from Llay in Wrexham for the jump was Anne Lloyd, who has supported the Charity since her husband’s passing in 2005. Anne decided to take on the challenge after noticing the date of The Big Jump was on what would have been her late husband, Rob’s, 69th birthday.

Since announcing her fundraising effort on her Facebook page, support has flooded in from family and friends for Anne, who has managed to raise an impressive £3,010 for local research.

Anne said of the day: “What an absolutely great day the skydive was. I couldn’t believe how lucky we were with the weather and I felt at ease the moment I met my professional skydiver, Lee.

“From start to finish my experience has been filled with lovely surprises and coincidences. As well as being set on Rob’s birthday, a friend of mine happened to have a blue butterfly broach, like that of the Charity logo, that she gave me to wear and then after the jump the first song on the radio was Proud (by Heather Small).  “I’ve got a fair idea of what he would be saying – ‘Wife, you must be mad!’”

“I’m extremely proud of my wonderful family and friends who have sponsored me to do this skydive and raise such an amazing amount for a wonderful cause.”

A massive well done to all of our brave skydivers – their courage and dare-devil spirit is helping us to stop cancer sooner. 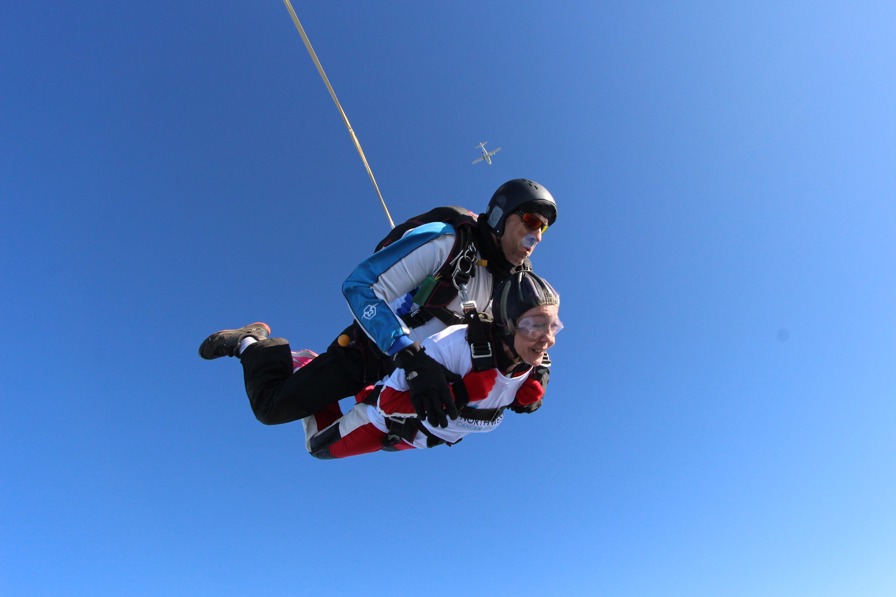 Take Part in an Event