Mark Thorne, from Cheshire, joined 14 other cyclists on the inaugural Cycle of Hope challenge for North West Cancer Research, as part of the charity’s 70th anniversary celebrations.

The 46-year-old self-proclaimed cycling novice, had just four weeks to train for the event, which saw him cycle from Lancaster to Dublin via Bangor and Liverpool.

Rutherford Diagnostics is a subsidiary of Proton Partners, who are the company behind a national network of cancer centres. Rutherford Cancer Centres announced its headline sponsorship for Cycle of Hope earlier this year. The company will deliver a £35million oncology centre in Liverpool which is scheduled for completion Autumn 2019.

Mark said: “I came across North West Cancer Research as part of my role with Rutherford Diagnostics and when I heard about Cycle of Hope I jumped at the chance to give it a go – even though it was only a few weeks out.

“As a company which is committed to investing in new technologies which will help develop effective cancer treatments, we are proud to be aligned with North West Cancer Research and support its inaugural cycling fundraiser.

“Taking part in the challenge was both tough but extremely rewarding. The cyclists who took part each had their own inspiring story as to why they were taking part and it was their determination which got me through the four days. 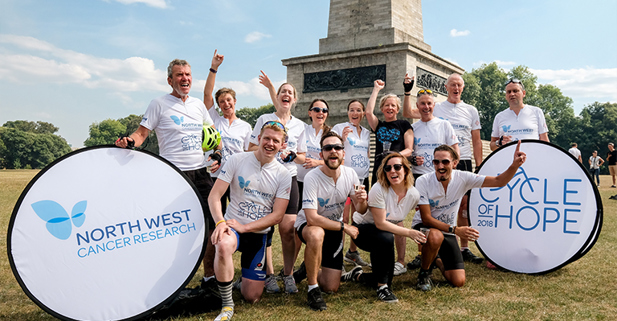 The inaugural Cycle of Hope event kicked off on 11 July and took four days to complete. The course took cyclists on a tour of the locations where North West Cancer Research has supported innovative research, including Liverpool and Bangor, before crossing the finish line in Ireland’s historic capital city, Dublin on 14 July.

Alastair Richards, CEO at North West Cancer Research, said: “Each and every one of the cyclists were phenomenal in their dedication to training and fundraising and their determination to finish the course was fantastic to see.

“On behalf of everyone at North West Cancer Research I would like to thank them for their efforts. They all had their own personal reasons for partaking and I think they all did their selves proud.”

The course took cyclists on a tour of the locations where North West Cancer Research has supported innovative research, including Liverpool and Bangor, before crossing the finish line in Ireland’s historic capital city, Dublin on 14 July.