"I didn't know how serious skin cancer could be"

A business owner from Bury is backing our skin cancer awareness campaign after her own experience with the disease. 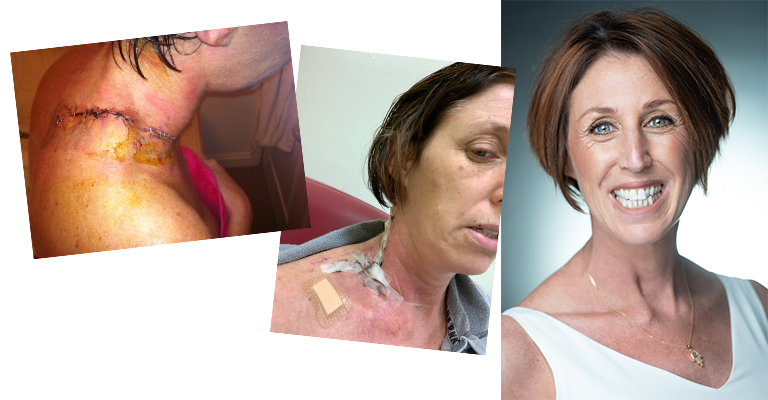 After being diagnosed with a serious form of skin cancer for the second time, Dr Sarah Carlick is encouraging people across Greater Manchester to be more vigilant when it comes to sun safety this summer, as skin cancer rates rise across the region.

Dr Sarah Carlick, 45, from Bury, is supporting this year’s skin cancer campaign from North West Cancer Research, which will raise awareness of skin cancer, its causes, symptoms and preventative methods.

Sarah, who runs two of her own businesses, was first diagnosed with malignant melanoma (a form of skin cancer) in 2012, after noticing an abnormal freckle on her right shoulder.

It was only after visiting the GP, encouraged by her mother who was being treated for ovarian cancer at the time, that she was called back in for a biopsy, which later revealed it was malignant melanoma.

Due to early diagnosis, the cancer was fully removed during an operation for a wide excision and a skin graft was luckily avoided.At the time a sentinel lymph node biopsy was undertaken and came back clear, however the operation left Sarah with a large scar across her upper back, by her neck and under her arm on the right side of her body.

Sarah was in remission for the next five years and was able to run her training and consultancy business for safeguarding children and adults at risk, alongside a startup technology companyin the same field. She also completed her doctorate degree in 2018 at Lancaster University.

However, in August 2018, Sarah noticed a lump on her right collarbone and immediately visited her GP. Just one day after her graduation, Sarah’s doctors confirmed that the cancer had returned as stage three malignant melanoma.

Sarah had a further operation in January 2019 at The Christie Hospital, to remove the malignant melanoma and is now undergoing 12 months of targeted therapy. Sarah is unable to exercise and has been forced to take long periods of time off from her two businesses, greatly affecting her physical and mental health.

Sarah said: “I wasn’t aware of the seriousness of sun protection growing up and I regularly got sunburnt as a child, as well as being a user of sunbeds in the family home as a young adult. I wasn’t educated on the symptoms of skin cancer and had no idea after six and half years it could return”.

“I was heartbroken when the doctor told me that the skin cancer had returned after so long in remission. The treatment has completely put my life on hold and I’m now enduring targeted therapy as a preventative measure to stop the melanoma returning.”

Sarah is supporting North West Cancer Research’s campaign this summer to encourage people to use the necessary protection from the sun and to check their skin regularly for any abnormalities.

Sarah added: “It’s so important that people are educated on how to enjoy the sun safely because I know how much skin cancer can affect your life. There are lots of factors that can contribute to skin cancer, many of which are preventable, and I would encourage everyone to regularly use sun cream and stay out of the sun when possible.

“I will be supporting North West Cancer Research’s skin cancer campaign to raise awareness of the importance of sun safety, especially in the UK.”

The campaign will educate people about the early warning signs of skin cancer and the importance of visiting their GP as soon as they have any concerns.

Changes in your moles, as well as the appearance of new moles and skin blemishes, are potential markers of skin cancer. You should always also look out for itching, bleeding and crusting and contact your GP straight away if you spot these symptoms

“By raising awareness of skin cancer, its symptoms and the associated risk factors of over exposure to UV rays, we hope we can encourage people to be sensible when spending time in the sun and reduce the number of skin cancer cases in Merseyside and across the North West.”

Find out more about the campaign